History of the Club

Marian Basketball Club was founded in 1968 when a group of pupils and past-pupils of Marian College Ballsbridge entered a team in the Dublin Minor Basketball league.

The team won the Dublin Minor Championship and two years later, the club also entered a team in the Dublin Senior League. This team absorbed an existing team called The Shannon Dodgers, which featured Dublin-based past pupils of St. Marys College, Athlone, another Marist Brothers school. These included Bill Doyle, who later taught in Marian College, and Lonan Mc Hugo.

In 1970, the club won the Dublin Senior Championship with Ken McIntyre, Paul and Michael Meany, Sean Conroy and Fran Ryan all featuring. Fifteen year old Donal Breathnach made his senior debut that season.

In 1971, Marian Basketball Club formed a ladies team, with past pupils of Loreto College Crumlin forming the core of the squad. The Deegan sisters (Patricia and Debbie ) Frances Fitzgibbon, Catherine Hatton, Alva Moloney and Muriel Gaffney were among the new members.
A couple of years later, a second ladies team was formed with Mary Kenny,Christine Gaffney, Trish Connor, Anita Maher and Jackie Deegan at the heart of it.

Along with the Womens A and B teams, and the Mens A team, the club also ran a Mens B and C team in the Dublin League Divisions 2 and 3, and an Under 19 team in the Minor League.

In 1972, New York native Brian Berman, who was studying medicine in the College of Surgeons, and had played college basketball at Columbia University, joined the team.Under player coach Paul Meany,Marian won their first national title, the National Cup

In 1975,76 and 77 Marian finished runners up in the National League behind Killester.

1978 Marian entered the Federation Cup for British and Irish teams. Marian beat Scottish champions Boromuir Barrs in Inchicore and faced English kingpins Doncaster Panthers away in the second round. Despite a serious height deficit ( Panthers forward line was 7’11” and 6’10”- Marian’s tallest was Michael Meany at 6’3”), the team competed well but lost.

In November the club celebrated its 10th anniversary with an AllStar game in Inchicore and a dinner dance in the Green Isle Hotel.

One of the clubs hallmarks was the vibrant social scene with a very active social committee organising regular club parties, fundraisers and even club holidays. In 1972 Marian Basketball Club organised a mixed basketball tournament in Inchicore which by all accounts was great fun, and not just for the basketball. In the summer of 1973 the club rented a house in the remote townland of Toor near Tipperary town and up to thirty members descended for weeks and weekend of partying

Of course the Killarney Tournament for womens teams always attracted more enthusiasm from the male members than from those actually competing and many sleepless nights were spent in buses and baths and fleeing hotel bedrooms by fire escape.

Many matches were made in Marian Basketball Club with Fran and Debbie Ryan, Ken and Muriel McIntyre,Donal and Mary Walsh, Sean and Anita Conroy and Liam and Sheila Lavelle all falling into the same trap of getting married to the sport.

The 1979-80 season marked a sea change in Irish basketball as it was the first time paid players were recruited from overseas. St Vincents Killarney brought over two American players and went on to win their first ever National League title. The league brought in regulations to limit the number of foreign born players to two and thus prevent the full professionalisation of the league as had happened in Britain

In September 1980, Marian was asked by the Irish Basketball Association to organise the first ever televised tournament, sponsored by Coca Cola. This was a great success, with six games being recorded in one evening and subsequently transmitted on RTE. Marian competed along with Killester, St Vincents Dublin, St Vincents Killarney, Blue Demons of Cork. A packed Oblate Hall lent a great atmosphere to the occasion.

In February 1981,Marian played Killarney in the first ever televised national league match and beat the champions in a thrilling game in Inchicore.Blue Demons brought the league title to Cork.

The club held a very successful international tournament in Inchicore which was won by Blue Demons of Cork.

A mid table finish behind a poweful St Vincents Killarney team meant the club had to seriously raise sponsorship and finance to compete in the new semiprofessional era. The Irish Basketball Association promoted a scheme whereby American investors put money into club franchise, including Marian. George Murphy from Chicago was the principal investor in the club franchise. The club also acquired sponsorship from Yoplait and was called Team Yoplait for the next four seasons.Irish International Michael Meany retired from National League. Brian Coke was recruited from Lowell College in Massachussetts.

Unfortunately, results on court were not so good and the team was relegated from the top flight at the end of the 1982-83 season.

The second team made up for it with the Club’s third national championship, the Intermediate Cup, won in Cork by a team featuring Paul, Michael and Robbie Meany and coached by Marcus O Philbin.

Team Yoplait had a very successful campaign in Division 2, finishing a close second behind Liam McHales Ballina, and winning promotion back to the top flight.

The season was topped off by an International Tournament, which featured Winthrop College from North Carolina, held in Inchicore.

With renewed vigour and healthy funding, the club faced into 1984-85 seaon with confidence. Fran Ryan took over as coach and Dan Trant, an exciting guard and Alvis Rogers a 6’8” power forward from Wake Forest were brought in.

In November 1984, the club embarked on the first of three consecutive U.S. tours. With eight games in ten days, the tour was a highlight of many peoples careers, with games against top Division One NCAA teams like Virginia Tech, College of Charleston, Radford, James Madison and of course our hosts Winthrop.

The club also entered the Womens National League with a squad sponsored by Opel. Irish internationals Ann Connellan and Pauline McCarthy joined the squad, along with Peggy Murphy from Chicago

The season came to a disappointing end with Team Yoplait just missing out on a top four place. More significantly the club had run up a significant debt and a serious rethink of the viability of the national league franchise was undertaken.

The men’s national league team was separated from the club, financially and management wise.The home venue was moved back to Inchicore. Mike Smith and William Milteer were recruited and Yoplait were retained as sponsors. The team embarked on its second U.S. tour in November, including games against Wake Forest, University of South Carolina and Davidson College. John Irwin joined the club.

More significantly, the club renewed its focus on underage coaching in Marian and other local schools. Kieran Dunne in particular put a huge amount of energy into developing young players at this time

January 1986 saw Yoplait reach the semifinal of the National Cup with a live tv transmission (another first for Irish basketball). Facing Neptune who were leading the league, Yoplait almost upset the odds. However the league form continued to disappoint, with a late rally tying with Ballina and Sporting Belfast for two relegation spots. A playoff and a last minute threepointer saw Marian relegated for the second time in four seasons.

The club embarked on its third tour of the U.S. in November with guest players Liam McHale (Ballina) and Gerry Caffrey(Corinthians)

Paul Meany came back as coach and Fran Ryan returned as point guard and the team won seven in a row. At Christmas three players left the squad and seven defeats left Marian struggling to make the Division Two top four playoffs

Another poor season at National League level. Ed Randolph signed from Admirals and Alan Fearon made an impressive debut as a young seventeen year old. Donal Breathnach retired from National League duty.
Signs of hope at underage level as Kieran Dunne brings Pat Glover and Gary Edge into U13 team.

The less said the better. I think the women’s section may have disbanded around this time.

Paul Meany was a founder member of Marian Basketball Club,and has been a leading member and supporter since 1968. He has played senior basketball in 5 decades-sixties,seventies,eighties,nineties and noughties before finally hanging up his boots.
He has also won national cup in 1973, national league in 1978, national intermediate championship in 1983, and has featured in most Marian winning teams including Dublin Minor, Senior Division One, Two and Three championships. He has also a distinguished record as a coach at National League (Men’s and Women’s) and under age levels, and has served as an excellent administrator for the sport at Club, Dublin and National Levels. As a hobby, he runs Marian College, Ballsbridge.

UCD Marian was awarded Basketball Ireland’s Club of the Year at their annual end of season awards. Congratulations to all volunteers, coaches and players for their work and support in making this possible.

UCD ELITE TEAM OF THE YEAR 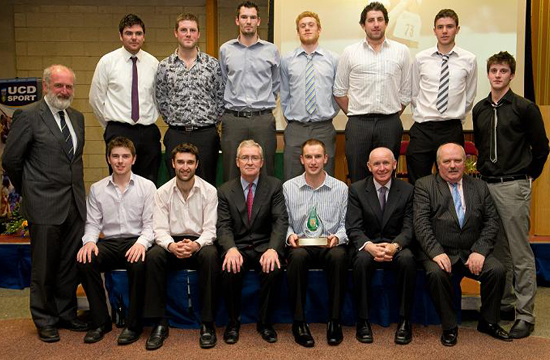 The SuperLeague team was named UCD’s Elite Club of the year at the universities annual sports awards. This is a huge honour for the club and caps off a great year for the Superleague team. The picture shows the players with the award which was presented by UCD president Hugh Brady 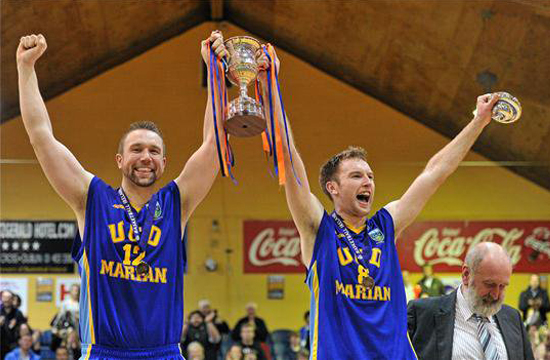 Marians SuperLeague team claimed an historic win over defending cup champions 11890 Killester. The win is the clubs first National Cup win in over 25 years. A big thanks to all the supporters who came to the game.